Initial results of the census in Bosnia and Herzegovina (BiH) showed that decades of nationalistic politics have entrenched ethnic and religious differences, reconfirming the ethnic cleansing ‘gains’ from the 1990s war. They also pointed to an urgent need for more education, since high levels of illiteracy — including computer illiteracy — affect its capacity to compete in the modern world.

Feminist and digital rights activist Valentina Hvale Pellizzer drew attention to the side-strapped census issue through a comprehensive analysis published on her blog.

Pellizzer noted that, as expected, all stakeholders were dissatisfied after the publishing of the census results. Contrary to advice by civil society, this major statistical operation was conducted with poor preparation and implementation, and without clear measures against management negligence or for the protection of people's personal data:

Political parties representing the three main ethnic blocks campaigned with a focus on reaffirming the demography of division through three questions: ethnicity, religion and ‘mother language’.

Civil society fought and lost its battle to have those questions as optional instead of compulsory […] so the only choice for people was about getting creative in responding or selecting ‘do not want to declare/state my ethnicity, religion or mother tongue’ option. Twenty years after the war, the priority of the parties was to claim victory, or to bring the ethnic rhetoric of victimhood to a new stage.

For years, due to disagreement on how to aggregate divergences among the three statistic agencies in BiH (the state agency and agencies from the two political entities, Republika Srpska and the Federation), the only census data publicly available was the overall number of people living in the country and in the main cities. Naturally, this allowed for much speculation, similarly to other multi-ethnic Balkan countries. Macedonia, for instance, has not had a census since 2002, even though by law this basic statistical operation needs to take place every ten years.

Under pressure by the international community, the BiH Agency for Statistics published the results just one day before the very last deadline, on June 30, 2016. The agency also created the open data web site popis2013.ba, which — more than three months later — still lacks all the promised visual and interactive elements, instead displaying a demotivating message, “Soon” (“Uskoro”). However, it does provide downloads of PDF and Excel files with the demographic data, which Pellizzer used as the basis for her analysis.

According to the results, most BiH citizens, which number more than 3.5 million, consider themselves as members of one of the three main ethnic communities — Bosniak, Serb and Croat. They speak the corresponding ethnic language and declared in the survey that they are religious, affiliated with the faiths of Islam, Orthodox and Catholic Christianity, respectively. 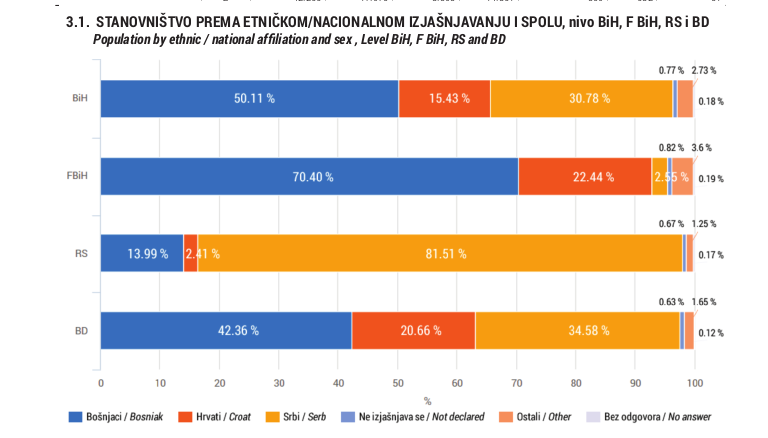 Choosing the designation of Bosnian (“bosanski”), and not the more ethnic version of Bosniaks (“bošnjački”) for the language of the Bosniaks, the biggest ethnic group, was the cause of yet another institutional crisis between the main ethnic Bosniak and Serb parties.

The released results also showed that out of 3.5 million residents, over 96,000 belong to the “others” — ethnic communities which are not one of the “big three” — while 27,000 refused to declare any ethnic affiliation, and 6,000 respondents selected “unknown”. No details were released on the numbers comprising the “others”, including the Roma.

Pellizzer made the observation that if the 130,054 inhabitants who do not consider themselves members of the three major ethnic groups all lived in the same town, it would be the third largest town in the country, after Sarajevo and Banja Luka:

In this little town would also live a majority of 118,612 agnostic/atheist/do not declares/others or unknowns with just 63,066 people speaking a language different from the mother language of the three main ethnic groups, a language which the current results defined as other/unknown. And this ‘town’ would summarize the overall size of the multiculturalism and multi-ethnicity of post-war Bosnia Herzegovina.

It seems that, with the exception of major cities like Sarajevo and Tuzla, most BiH citizens live in segregated territorial units, without much contact across ethnic lines.

The census failed to provide meaningful results on people with disabilities, as the questions were incorrectly formulated. “Disability remains marginalized by the census as an additional lost opportunity of bringing clarity and relevant information for a better planning of resources,” Pellizzer wrote. This Twitter user added:

BiH has the highest number of ILLITERATE citizens and the lowest number of citizens with high education in the region. Now, that's the real news about the census, everything else is politicking!

The census also showed that almost 3% of the population — mostly women and girls — is illiterate. Available data on education shows that over a million citizens have either only primary level education or none at all. Data on computer literacy shows that 1.1 million people are computer illiterate, unable to process a text, create a table, or use e-mail and the internet. 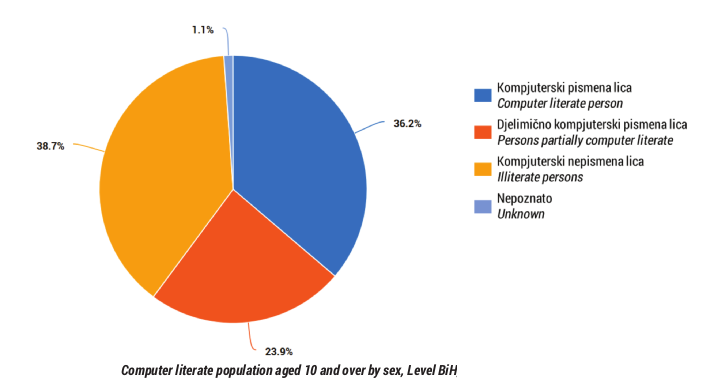 In the wrap up of her analysis, Pellizzer concluded that nearly half of the population of Bosnia and Herzegovina is not well equipped enough to either participate in or benefit from today's information age; there was also a worrisome gender gap:

If we have more than half of the population […] barely able to use computers and navigate the current digital environment how can we even talk about employment and qualification of workers? Which future are we suggesting when women/girls are suffering a double gap in education: literacy and digital literacy? […]

Bosnia Herzegovina is a country of illiterates, with an adult, aging population. The average age is 39.5 years old. Adults are very challenged in changing their own behavior, so how they can turn around the negative trends of politics, the economy and social welfare of their country? This late, imperfect, incomplete and contested census is more than scary.

Education should be the most serious, urgent and strategic problem for the plethora of politicians constantly ready, at each electoral round, administrative or political, to spend millions of words in campaigning about how they will build or rebuild their country, entity, cantons, or municipality.

In December 2016, the International Monitoring Operation is supposed to provide an “approval” on the census results.