Italy: A brief history of the "flow decrees"

The "Decreto flusso", the "flow decree" is a measure with which the Italian government establishes each year the entry quotas for non-EU foreign citizens who may enter Italy for dependent, autonomous and seasonal work.

Expected by the end of the year is the 2021 "flow decree", the instrument that determines how many foreign workers may enter Italy in a given year. The quota also defines which types of workers are required: seasonal, self-employed, dependent and so on. The decree does not concern citizens of EU countries, for whom free movement is ivalid, nor entries for family reunification and humanitarian reasons, which follow other procedures.

The first expectations speak of a total of 80,000 entries, but still do not show the distribution between seasonal and non-seasonal. This would be in any case a turning point compared to the last six years, when the total number had always remained constant at 30,850. And, since 2011, it has never exceeded sixty thousand.

If, on the one hand, some political forces are already shouting scandal for this "opening of the borders", on the other hand,  other economic categories are asking to do it quickly because of the lack of manpower.

Since its introduction in 1998, the "flow decree" has been the main instrument for planning the entry of immigrants for work purposes. Excluding seasonal workers (1.2 million in total, but in many cases these are the same people who have entered in different years), in about twenty years over 800.000 foreign workers have entered in this way.

Since 2008, the year in which the global financial crisis began, planned entries have been drastically reduced to just a few thousand plus seasonal workers.

To these must be added another 2 million workers regularized through the most hasty "amnesties": that of 2003, for example, remains one of the largest ever in Europe, with about 650.000 people regularized in a few months.

The regularization a posteriori ("amnesty") represents an implicit admission of the inability to regulate entry.

Moreover, in recent years the main channels for entry into Italy have been family reunification and humanitarian reasons. In both cases, applications are assessed individually, without "quotas".

In essence, the low numbers of "flow decrees" in recent years did not result from a lack of need for foreign labor. On the contrary, the reduced use of flows has pushed towards the use of "other" channels of entry, more difficult to monitor: EU citizens, landings, because of family reunions, tourist visas. 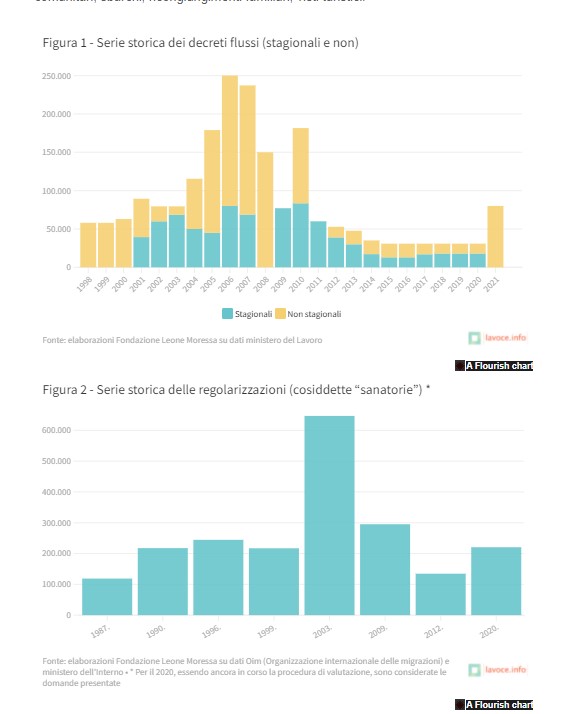 The main argument used by those who oppose the "flows decree" is the presence in Italy of 2.6 million "citizenship income" recipients (Ministry of Labor report for 2019). In reality, not all recipients of the citizenship income are directly employable: in fact, minors, people with disabilities, people already employed but with very low incomes are included. Not even the 2.3 million unemployed (ISTAT data updated to October 2021) would meet the demand for labor, due to their geographical location, professional characteristics and other reasons. The number also includes the foreign unemployed, but this does not mean that they can directly fill labor market shortages.

In 2019, Luigi Cannari, deputy head of the economics and statistics department of the Bank of Italy, explained that "with current demographic trends, we would have a drop in GDP between now and 2060 of 11.5 percent. To compensate for this demographic trend, we would need an increase in productivity of 0.3 percent per year." In addition, "Not only is there no displacement, in the sense that the work of immigrants reduces the work of the natives, but in some situations - particularly for women - the entry of the foreign population may even encourage greater participation in the labor market".

Tito Boeri comes to similar conclusions, who, in a 2019 article, explained that "When work increases in Italy, it increases for everyone: Italians and immigrants. When it decreases, it decreases for everyone. [...] This should not be surprising because work creates work. One more carer allows one more Italian woman to work and vice versa. [...] If there were no immigrants to do these jobs, many companies would fail, taking jobs away from Italians".

What other countries do

Another piece of data useful for understanding Italian immigration policy is that of residence permits. If until 2010, there were more than 500,000 new permits issued every year, recently there has been a drastic decline, with the lowest minimum reached in 2020 (106,000 permits)

In addition, the composition of new admissions has changed dramatically. Until 2010, entries for work accounted for the majority component, today they are less than a tenth of the total.

With the exception of 2016 and 2017, when there was a spike in "other reasons" (mainly asylum and humanitarian reasons), in the last ten years, the main component has been family reunification. 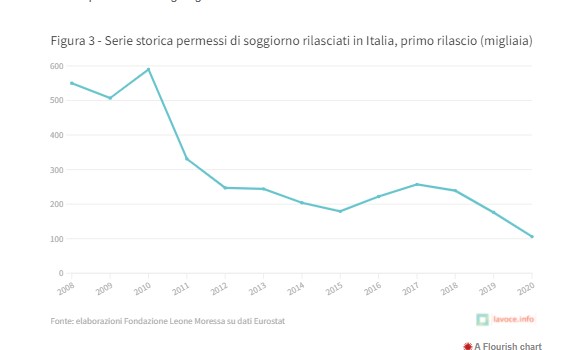 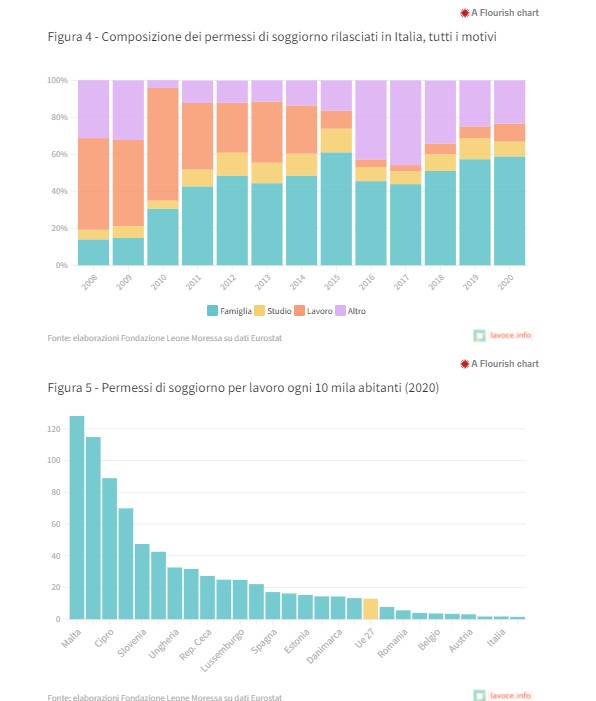 At the European level, in absolute terms, the 10 .000 Italian work permits are less than those issued by Romania and Slovakia. Comparing them to the number of inhabitants, in 2020 Italy occupied the penultimate place, only Greece ranks lower. In fact, in Italy, work permits amounted to just 1.7 per 10.000 inhabitants, compared to the EU average of 12.9.

It is also quite surprising that Eastern European countries (those of the Visegrad group, which has always been hostile to the reception of migrants) show a higher number of work permits than Italy: 161,000 in Poland (first in terms of number of work permits), 32,000 in Hungary (three times as many as Italy), 29,000 in the Czech Republic and 12,000 in Slovakia (more than Italy, despite a population of only around 5.5 million).

The announced increase in entry quotas for immigrant workers in Italy does not, therefore, represent an "unconditional opening of the borders"; on the contrary, it is an attempt to respond to an economic need through reasoned and controlled planning, the exact opposite of an emergency management based on "amnesties".