In most populations worldwide, life expectancy is continuously rising. But among white Americans it is decreasing in midlife. A shocking fact highlighted by a new study “Rising morbidity and mortality in midlife among white non-Hispanic Americans in the 21st century” by Anne Case and Angus Deaton; the latter being the new Nobel Prize winner in economics.

Death rates among middle aged white Americans are being driven not by the big killers like heart disease and diabetes but by an epidemic of suicides and afflictions stemming from substance abuse: alcoholic liver disease and overdoses of heroin and prescription opioids.

It's the economy, stupid!

was James Carville's famous explanation for Bill Clinton's victory in 1992 over George H.W. Bush.  It's again the economy which is by many seen as the root cause of the unusually early deaths among middle aged whites in the U.S. between 1999 and 2013.

This change reversed decades of progress in (lowering) mortality and was unique to the United States; no other rich country saw a similar turnaround, the paper says. Well, this is not quite true. A precipitous decline in life expectancy occurred in Russia between 1988 and 2003, affecting the male and female population alike. Russian males did by 2013 not yet fully re-attain the life expectancy level they had enjoyed in 1985.

The implosion of the Soviet Union combined with rampant alcoholism is usually seen as the cause of Russia's fifteen year long epidemic of early deaths. But what has happened in the United States?

Politically, the period 1999 to 2013 covers the outgoing second Clinton presidency, the George W. Bush years and the first Barack Obama term. Nothing in politics that could help explain a major demographic shift.

However, there was the 2009 financial crisis which drove millions of Americans out of their homes and/or into personal bankruptcy. Still, the trend toward rising mortality had started a decade earlier. 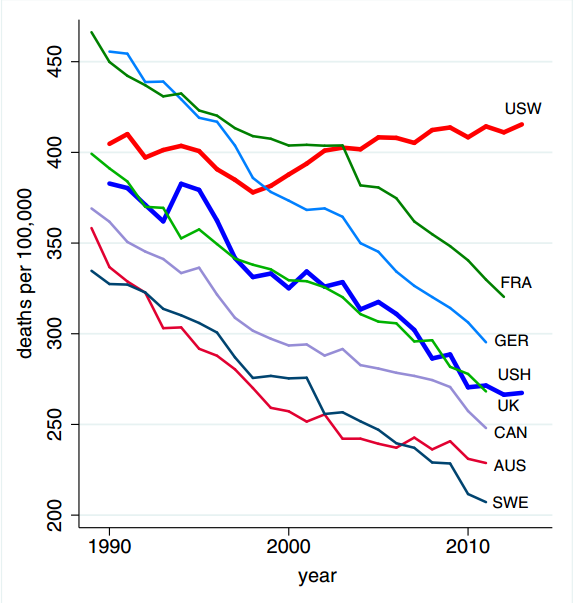 Many media reviewing and discussing the study concluded that economic reasons were the main agents pushing up mortality. However, this view appears simplistic. The authors of the paper themselves said: Growth in real median earnings has been slow for this group, especially those with only a high school education. However, the productivity slowdown is common to many rich countries, some of which have seen even slower growth in median earnings than the United States, yet none have had the same mortality experience.

Instead, the authors emphasize an epidemic of pain, suicide, and drug overdoses as well as rising morbidity as the chief causes of the heavy loss of lives comparable only to the AIDS epidemic. The paper notes... the three causes of death that account for the mortality reversal among white non-Hispanics, namely suicide, drug and alcohol poisoning (accidental and intent undetermined), and chronic liver diseases and cirrhosis. All three increased year-on-year after 1998.

When trying to identify the causes of the mortality increase it would be helpful to know if there are any gender differences. Unfortunately, the paper does not break down the mortality figures by sex.

Although the data relates to all races it can be suspected that during the period under consideration  white women were even more affected by rising mortality than white men at all but the highest education level. This could be a significant factor in trying to find an explanation for the American whites' exceptional mortality trend. 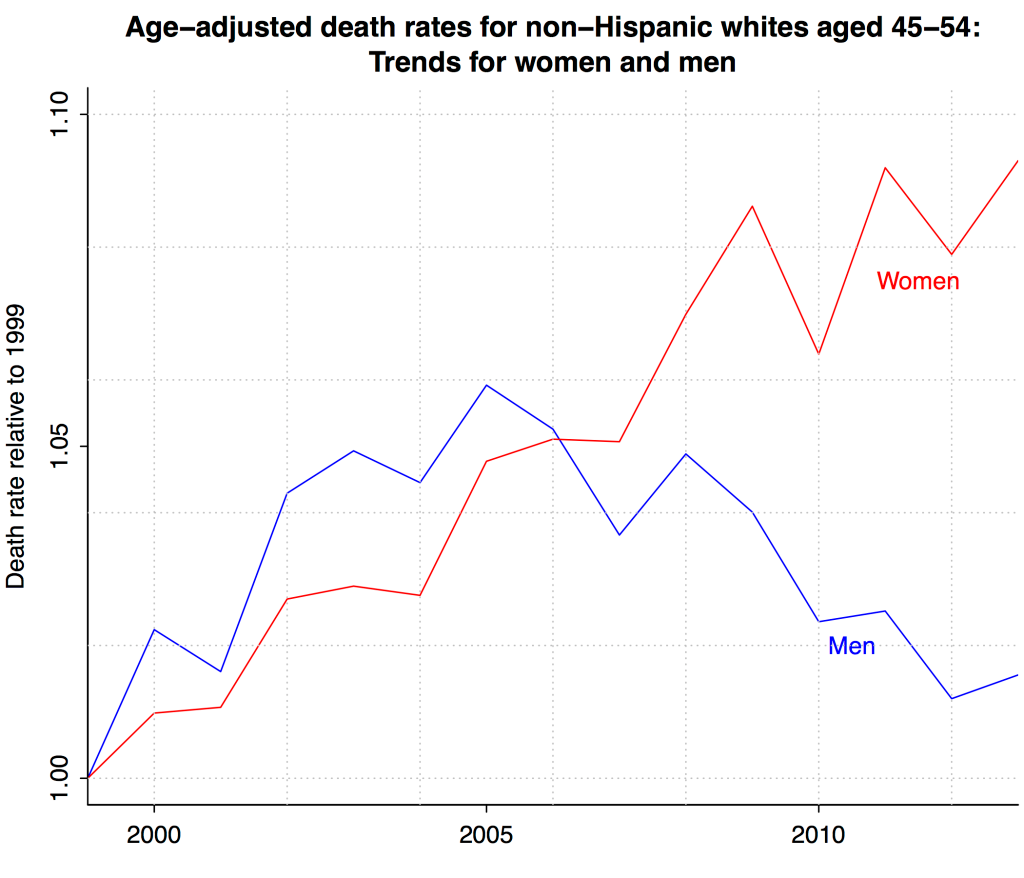 By not looking at men and women separately, Case and Deaton failed to see that rising mortality is especially pronounced among women. (Laudan Aron et.al.)

Laudan Aron: Our own analysis of the same data used by Case and Deaton shows that the average increase in age-specific mortality rates for whites age 45-54 was more than three times higher for women than men.  More specifically, between 1999 and 2013, age-specific mortality rates for US white women age 45-54 increased by 26.8 deaths per 100,000 population, while the corresponding increase for men was 7.7 deaths. By lumping women and men together, the study also missed the important point that the increases in mortality are affecting women of reproductive and childrearing ages.

Our recent analysis (Nan Marie Astone et.al.) of  causes of death among American women confirmed increasing death rates among non-Hispanic white women ages 15 to 54 specifically. Like Case and Deaton, we found accidental poisonings (linked to prescription opioid and heroin use) and suicides to be among the biggest drivers of this increase.

By 2008, life expectancy for black women without a high school diploma had surpassed that of white women of the same education level. (S. Jay Olshansky et.al.)

Could the trend have been triggered by a sudden deterioration of the economic situation of whites, as compared to all other races (which continue to show a rising life expectancy trend)?

The year 1998 did not bring any economic disaster for American whites. On the contrary: the chronology of major economic events notes: In 1998, the US poverty rate fell to its lowest in 20 years at 12.7 percent. Real median household income hit a record 3.5 percent growth surpassing its pre-recessionary peak in 1989, and for the first time since 1975, all four US regions experienced significant increases.

For 2000, the chronology notes: First quarter GDP grew at an annual rate of 5.4 percent with consumer spending jumping 8.3 percent, the sharpest gain in more than 17 years.

In conclusion,  the starting years of the life expectancy slump were boom years. Nothing happened which could have  affected the economics of the average white working class family.

It's not the economy, stupid!

O.K., what is it? What got the death epidemic started?

The big puzzle is why the recent experience of middle-aged white Americans with modest educations has been so different  (from that of similar groups in other countries) ?

In 1980, the New England Journal of Medicine published a short letter titled  Addiction rare in patients treated with narcotics. After this letter, some studies surfaced which minimzed the risk of becoming addicted to opioid analgesics.

Encouraged by pharmaceutical companies, outpatient doctors and hospitals started prescribing narcotics drugs – mainly intended to treat cancer pain – on a massive scale to treat neck and back pain, rheumatoid arthritis and assorted ailments. The patients loved it and quickly got addicted.

Since 1999, the amount of prescription painkillers prescribed and sold in the U.S. has nearly quadrupled, yet there was no overall change in the amount of pain that Americans report, the Centers for Disease Control and Prevention (CDC) noted.

Deaths from overdoses and negative side effects of opioid use shot up. Increasing doses of pain pills can even lead to increased sensitivity for pain, resulting in utter despair and even suicide. Also, difficulty encountered in procuring enough pain pills led some people to switch to hard drugs. According to the Centers for Disease Control, people who get addicted to opioid painkillers are forty times likelier to become heroin addicts than people who don’t use opioids or other drugs.

The prescription pain relief boom of the 2000s, combined with increased hard drug consumption could indeed explain the surge in premature middle age deaths. But why did it above all affect Whites, aka Caucasians?

For reasons which are not very clear, both sexes of white Hispanics traditionally enjoy a much higher life expectancy than Caucasians. Pain relief abuse is not evident among Hispanics. Also, among Whites, the highest education group (Bachelor degree or higher) did not succumb to the pain pill craze.

Perhaps both the top educated Whites and the Hispanics were better aware of the inherent danger of narcotics. Or many Hispanics were without medical insurance and therefore did not enjoy easy access to prescription drugs. Or the industry focused its marketing on mainstream English language media which Hispanics do not watch or read. More research is needed to better explore the background of this epidemic of early deaths which so heavily affected the majority population.

Shocked by the mortality data, the Federal Government and several states took steps to rein in the misuse of opioid painkiller prescriptions . It will help to reduce new addictions but it will not cure those already addicted.

Prescribing rates have leveled off since 2010, and we’ve recently seen the first decline in opioid related deaths in decades. (CDC)

John Cassidy of the New Yorker subsumed the situation: Thanks to all of the attention that the Case and Deaton study has received, this will surely change. That can only be for the good.

Several socio-economic theories have tried to explain the Whites' early death phenomenon. None of the theories can satisfy.

The mortality trend started to change during economic boom years which saw people happily shopping. Optimism prevailed. When a number of medical studies paralleled by the industry's heavy marketing of pain pills promised a pain free life style without the danger of addiction, many white people fell for it, above all women.

Why other races did not fall into the trap remains to be explored. Are they more immune to advertisement? Or too poor to afford drugs in addictive quantities?

The best antidote against drug abuse is, as the data shows, education. If America wants to win the War on Drugs it will have to heavily invest in education.

The rates of babies in rural American areas born with symptoms of opioid withdrawal has skyrocketed, illustrating another symptom of the ongoing opioid epidemic spreading through parts of the United States.

Rural babies and mothers with opoid-related conditions are more likely than urban ones to come from lower-income families, and have public insurance, according to a new study published Monday in the peer-reviewed journal JAMA Pediatrics.

Deaths from drug overdose have been identified as a significant public health burden in the United States in recent years (1–4). This report uses data from the National Vital Statistics System (NVSS) to highlight recent trends in drug overdose deaths, describing demographic and geographic patterns as well as the types of drugs involved.

"With the pharmaceutical lobby’s money keeping Congress on its side, regulations were rewritten to permit physicians to prescribe as many pills as they wanted without censure. Indeed, doctors sometimes found themselves hauled before ethics boards for not supplying enough."

"....while the public conversation has largely been on opioids and pot in recent years, alcohol use and abuse have been quietly rising.

Life expectancy in the U.S. continues to decline, as a new report revealed:

Life Expectancy and Mortality Rates in the United States, 1959-2017